With a seemingly never-ending drip of new-ins and new-outs, it can be hard on both your wallet and your wardrobe to continually play catch-up with the latest menswear collections. Luckily, this season sees some of 2019’s biggest trends spill over into 2020. So as well as breaking down what you […]

With a seemingly never-ending drip of new-ins and new-outs, it can be hard on both your wallet and your wardrobe to continually play catch-up with the latest menswear collections.

Luckily, this season sees some of 2019’s biggest trends spill over into 2020. So as well as breaking down what you should be holding on to in order to nail the key looks, we caught up with some industry insiders to get the styling tips that’ll maximise the wears from last year’s investments.

Form-hugging fits had been on their way out for a while but 2019 was the year that really finished them off. From baggy denim to Chandler Bing-approved oversized tailoring, loose cuts crept from the fringes of fashion and into mainstream menswear, marking a sartorial shift that looks set to continue long into the next decade.

It was a breath of fresh air for both our wardrobes and our testicles, as spray-on legwear disappeared almost entirely – replaced instead by straight-leg, relaxed and wide-leg fits – and boxy ’90s-inspired outerwear reigned supreme.

When you’ve spent the last year pouring yourself into slim- and skinny-fit everything, the idea of wearing something that doesn’t cling desperately to your calves can be a daunting prospect. The key to nailing it lies in knowing how to create a clean, cohesive silhouette from head to toe.

In most areas of menswear, contrast is a good thing, but not here. Wearing a pair of tight-fitting trousers and a baggy jacket for example will look unbalanced and disproportionate. The trick is to pair similar cuts to create a look that flows from head to toe. If your legwear is relaxed, whatever’s on your upper half should be, too. For several years, the overarching trend in men’s footwear fashion has been marked by a move away from minimalism and simplicity, and towards OTT styling and bulkiness. The rise of maximalism has been most evident in the sneaker world, but 2019 saw it take hold of our boots and brogues, too.

The commando sole is formal footwear’s answer to chunky sneaker madness. It’s bold and bulky, and has a way of completely altering the overall look of a shoe. Everything from classic Chelsea boots to dressy Derbies received the thick-tread treatment over the course of the last year, and with those rugged soles offering increased traction in wintery conditions, this is one of those rare trends that’s as practical as it is stylish. The best way to rock commando soles depends largely on the type of footwear they’re attached to. A commando-soled Chelsea or Derby boot, for example, is best paired with sturdy cold-weather pieces, giving anything too fitted a wide berth. Think regular-fit raw denim, a thick twill overshirt and a chore coat.

The classic Derby shoe is another silhouette that works well with a thicker sole, but the low-top design makes it a little more versatile, meaning it could even be worn with tailoring for less formal occasions. Just steer clear of skinny fits as the chunkiness created by the rugged sole can be a little jarring in contrast. It’s tricky to say what an era will be remembered for trend-wise without the benefit of hindsight, but if we were going to put money on it, we’d say that 2019 will go down as the year that function went fashion. Pockets were plentiful, the biggest names in fashion were playing with technical fabrics, and your bird-watching uncle’s street cred was at an all-time high.

This wasn’t just any old trend, though, it was one that actually made our lives easier. Because, let’s face it, a Gore-Tex hardshell is always going to hold up better in the rain than a wool peacoat. This considered, we’ll definitely be continuing to wear our outdoor-inspired garb into the new year and we’d suggest you do the same. 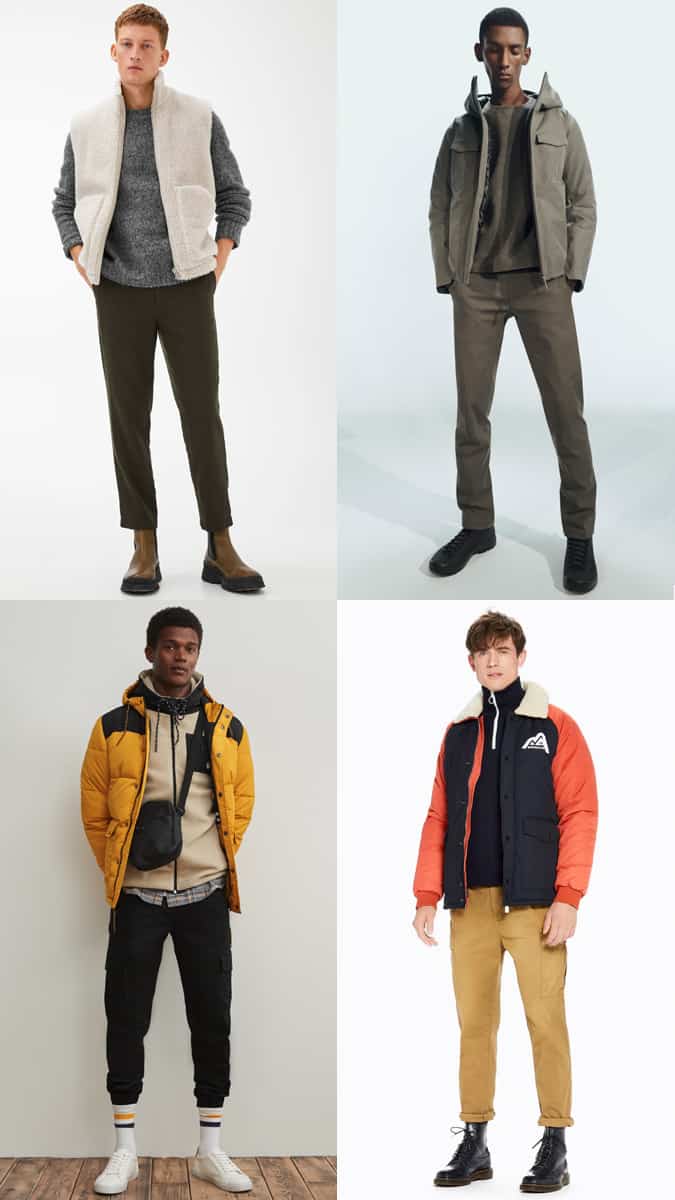 As was evidenced perfectly by the short-lived nu-rave trend of the mid 2000s, it’s never a good idea to deck yourself out head to toe in a trend unless you want your Facebook memories to get really awkward in a couple of years’ time. Instead, pick up a few key pieces and use them to update your current wardrobe. The obvious choices where outdoor gear is concerned would be a technical jacket, a fleece and some mountain-friendly footwear.

Use layering to create depth and keep legwear relaxed for balance. Accessories shouldn’t be neglected either; think thick textured socks, an appropriate timepiece, suitably outdoorsy luggage and a beanie to tie it all together. Texture and layering are two of the pillars of advanced dressing, and they’re both integral to one of 2019’s hottest tailoring trends. Suiting worn with knitwear was everywhere over the last 12 months, marking another step in the general loosening up of dress codes across the board. Stuffy shirts were replaced with fine-gauge rollnecks, fisherman beanies were teamed up with unstructured blazers and statement crewnecks lent simple suits a fresh lease of life.

It’s more than just a fleeting trend, though. This simple style move looks set to become a staple of modern menswear and is something that exudes the sort of timeless appeal needed to carry it into a new year and beyond. The beauty of knitwear and tailoring is that as long as you stick to the right pieces, it’s fairly straightforward to nail. Provided you’re not attempting to pair a Coogi jumper with a tuxedo, on the whole you should be fine.

The hero piece here is the rollneck, particularly one in a fine gauge to enable it to slip comfortably underneath a suit jacket without limiting movement. This knitted favourite makes an excellent substitute for a shirt when a suit needs to be dressed down without straying into sloppy territory. Generally speaking, the darker the colour, the smarter it’s going to look. As sun-drenched strolls home from the office mutate into dark, frigid commutes in torrential rain, sneakerheads all over the world are faced with a horrifying choice: to ruin their most prized possessions in the adverse weather or, perhaps even worse, to consider wearing footwear other than sneakers for the next couple of months.

Thankfully, 2019 and its taste for functional fashion brought with it a solution to this age-old seasonal conundrum: Gore-Tex sneakers…and plenty of them. From Nike to New Balance, every trainer brand worth its salt was experimenting with the waterproof fabric this year and we still can’t get enough of it. The selection of Gore-Tex sneakers hitting shelves over the course of the last year has included everything from waterproof versions of old classics like the Air Force 1, right through to high-performance trail shoes from the likes of Salomon and Hoka One One. This considered, how to style them depends heavily on the type of sneaker you opt to buy.

For all-round versatility, the best course of action is usually to go for something low-key. Timeless sneaker designs like the Stan Smith, the Superstar and the Converse All Star have all had Gore-Tex makeovers in 2019 and look just as good across your entire wardrobe as they always have. For more technical styles, match with outdoorsy pieces like cargos, down jackets and hardshells. Sat Mar 7 , 2020
Trying to find the true meaning of the phrase smart casual can quickly turn into a nightmare. The Oxford Dictionary defines it as “neat, conventional, yet relatively informal in style, especially as worn to conform to a particular dress code”. But these days it’s quite common for smart casual to […]