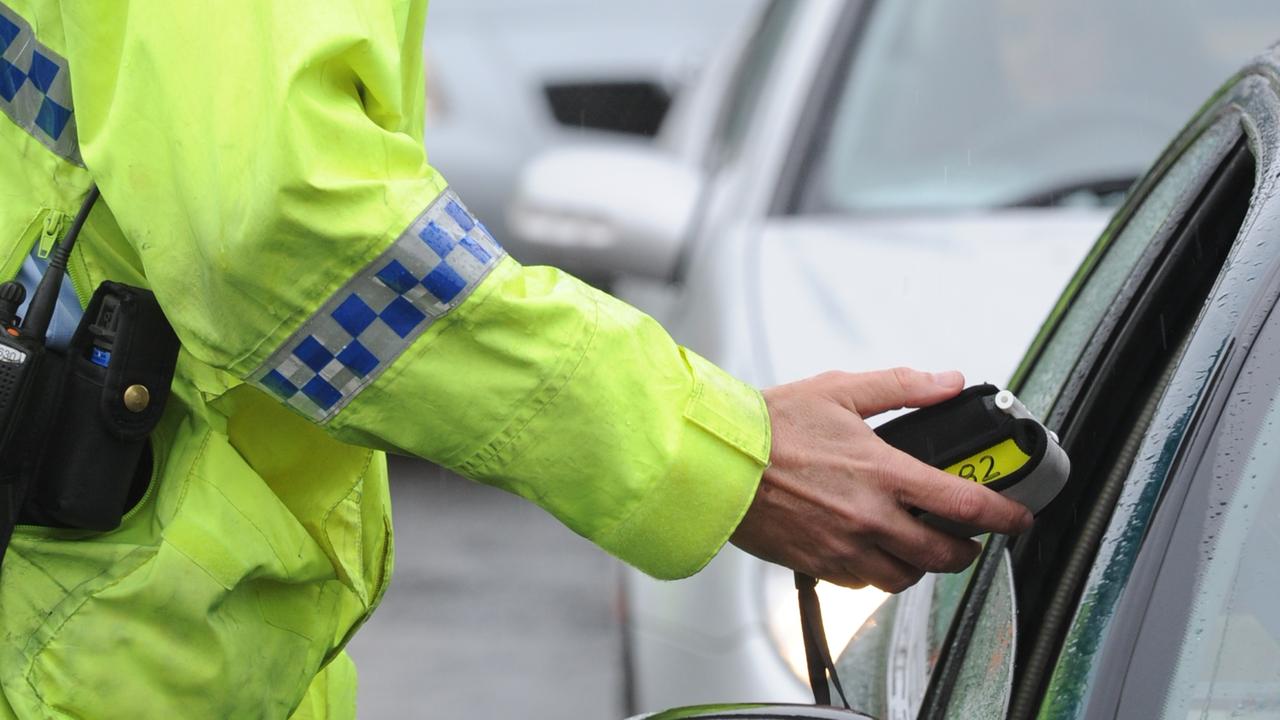 A woman with two children in her car has lost her driver’s licence after she blew more than seven times the legal limit in Adelaide’s northern suburbs on Easter Sunday.

SA Police said they will be notifying the Department for Child Protection.

The woman, 30, of Ingle Farm, was pulled over on Main North Rd in Salisbury East about 1.30pm for a mobile breath test.

Police say she returned a staggering blood alcohol reading of 0.365.

Officers were left baffled to find a fully sober person in the passenger seat.

“Officers couldn’t understand why a sober adult passenger in the car, who has a full licence, wasn’t given the keys to safely driver the family,” a police statement read.

She lost her licence for 12 months and will appear in court at a later date.

The passenger drove the kids home.

A man is on the run after sexually assaulting a woman in Adelaide’s CBD in the early hours of Easter Saturday.

Police say the assault happened in the southeast of the CBD, “in the vicinity” of Gilles and Pulteney streets between midnight and 1am.

They were called to a home in the area shortly after to investigate the incident.

The suspect, who was wearing a black fleece jumper and black trackpants, is described as being a man of Aboriginal appearance in his 40s.

He stands about 170cm tall with a stocky build, dark shoulder-length hair that is tightly curled and a “fuzzy beard”.

Anyone who saw a man matching the description around the time of the assault is urged to call Crime Stoppers on 1800 333 000.

Two people have been treated in hospital after a police pursuit through the streets of Adelaide’s CBD ended in a crash on Waymouth St last night.

Police tried to pull over a Volkswagen sedan that had “incorrect number plates” on Maxwell Ave in Edwardstown about 9.45pm.

It was not pursued by patrols as the driver, a 26-year-old man from Ingle Farm, allegedly sped off northbound on Marion Rd.

A police helicopter was called in to take over the chase as the Volkswagen entered the CBD.

The Volkswagen then crashed into a Mazda sedan at the intersection of Waymouth St and West Tce.

The driver of the Mazda, a woman in her 20s, was taken to the Royal Adelaide Hospital with minor injures.

A male passenger in the Volkswagen, 26, of Enfield, was taken to the same hospital with non life-threatening leg injuries.

His driver was arrested and charged with several offences, including driving in a dangerous manner and refusing to comply with a breath test. He was refused bail and will appear in the Adelaide Magistrates Court on Tuesday.

A woman has died after the car she was travelling in crashed into a tree in the Barossa Valley.

The crash happened at the intersection of Needles and Williamstown roads in Williamstown just before 9.30pm on Friday.

The passenger, a 65-year-old Elizabeth Park woman, died at the scene, while the driver suffered minor injuries.

The woman’s death brings SA’s road toll to 35, compared with 34 at the same time last year.

A man and a woman in a stolen car have been arrested after allegedly evading police three times during a chase through the western suburbs yesterday morning.

The stolen car, a white Holden Captiva, was allegedly being driven by a 20-year-old Davoren Park man and was first spotted on Tapleys Hill Rd at Seaton just before 8.30am.

Police tried to pull him over, but it is alleged he evaded police north on Frederick Rd. In the passenger seat was a woman, 29, of Munno Para West.

The car wasn’t seen again until noon, when the driver filled up at a Fulham Gardens petrol station on Tapleys Hill Rd.

As patrols approached the car, the man drove off again without paying for his petrol, allegedly.

He evaded officers once again as he drove east on Henley Beach Rd, before the Captiva was spotted again on Commercial Rd in Port Adelaide about 30 minutes later.

Officers lost sight of the car for a third time, but just minutes later, the duo was spotted on the driveway of a business on St Vincent St.

Police say the car was stolen from an address in Waterloo Corner on Tuesday. Officers searched the vehicle and founds items that were allegedly stolen from a parked car at Redwood Park yesterday morning.

The driver and passenger were both arrested and charged with illegal use.

The driver was hit with further charges, including driving dangerously to escape a police pursuit, unlawful possession and driving without a licence.

He was refused bail and will appear in the Port Adelaide Magistrates Court on Tuesday, while the woman was released – but will face court at a later date.

A man wearing a camouflage jumper is on the run after using a screwdriver to rob two service stations in Adelaide’s northern suburbs overnight.

The man first entered a service station on Bridge Rd in Pooraka before threatening the attendant with a screwdriver.

He used his screwdriver to threaten the staff member and stole cash.

He was last seen walking west on Watson Ave.

Staff at both stores were not injured.

Police say he is described as being aged about 40 and of Aboriginal appearance.

A man will spend Easter behind bars after allegedly speeding away from police and crashing into scrubland near Port Augusta.

Police tried to pull over the man, behind the wheel of a Nissan Tida, on Racecourse Rd at Stirling North just after 12.30am on Saturday.

He accelerated away from police at speeds of more than 100 km/h in a 50 km/h zone, police say.

Officers lost sight of the hatchback, but a short time later they discovered it had hit a kerb and came to rest in some scrubland.

The man, 29, of Stirling North, was arrested and charged with driving at a speed and manner dangerous to the public, refusing a breath test and hindering police.

He was refused bail and will appear in the Port Augusta Magistrates Court on Tuesday. He also lost his licence for a year.

An allegedly drunk L-plater riding a scooter was yelling at pedestrians on Anzac Highway before he was pulled over and blew 0.120 on Friday night.

The rider, a 19-year-old man from Glenunga, was pulled over in Plympton after a traffic enforcement officer noticed him yelling.

Police say he returned a blood-alcohol reading more than twice the legal limit.

He was reported for drink driving and lost his licence for six months, while his scooter was impounded for 28 days.

The teenager will appear in court at a later date.

SA Police took this as an opportunity to remind road users that officers are “still out in force” this Easter.

“(We have the power to pull over any vehicle, on any road, at any time and request that driver to submit to a drug or alcohol test.”

A dog, canary and their owner escaped a fire that damaged their Athelstone home this afternoon.

A neighbour who only gave his first name Shane said the fire started in the Kirkevue Road property after the owner left a pot of oil unattended on the stove.

“I was in the lounge room watching the idiot box when I heard the alarm go,” he said.

“I saw smoke coming out of the roof and I bolted and Annie (house owner) was half way out of her house.

“I screamed to my wife to call the fire brigade and went and got her (Annie’s) animals and my son tried to spray the roof.”

He said they couldn’t do anything to control the fire.

“It was too dangerous,” he said. “When we went inside there were flames everywhere.”

Shane, who was tending Annie’s labrador Leo and canary, Stevie, said Annie was shaken up by the fire.

MFS and CFS crews were on the scene just after 5pm and quickly extinguished the fire.

An MFS spokeswoman confirmed the fire was started by an pot of oil left unattended on the stove.

The flames were contained to the kitchen and the estimated damage bill is $65,000.

MAN ‘SETS OWN HOUSE ON FIRE’ DURING SIEGE

A man has been shot with non-lethal projectiles during a siege after allegedly throwing an airconditioner at a police officer and setting his Murray Bridge home on fire.

Two children and three other people were taken from the Owl Drive home while police started negotiations with the man about 1am on Friday.

When patrols arrived at the property minutes earlier, the man became aggressive and barricaded himself in a room, injuring an officer’s hand in a door, police say.

During the standoff, the man allegedly threw an airconditioning unit at an officer, which caused no injuries.

The man then allegedly poured petrol and set fire to the front of the house.

Fire crews extinguished the blaze, but not before it caused damage to the front of the property.

STAR Group officers and negotiators were called to the scene before three rounds were fired at the man, who was armed, police say.

It will be alleged he also threatened to hurt police.

After several hours of negotiations, the man was taken into police custody with minor injuries.

The 33-year-old from Murray Bridge was charged with arson and two counts of assaulting a prescribed emergency worker.

He was refused bail and will appear in the Murray Bridge Magistrates Court on April 14.

Elective surgery waiting lists to blow out amid COVID-19

Sun Apr 12 , 2020
All non-urgent elective surgery has been cancelled so hospital beds can be freed up for patients suffering coronavirus. But ironically as the waiting lists balloon, hundreds of hospital beds in the private sector are laying idle — leaving both private and public patients facing lengthy waits for surgery. Orthopaedic surgeon […]